Tender feelings of my sister JoLyn woke me in the early morning hours, and feeling moved, I sat up in bed and immediately set about trying to recapture details from my fleeting dream, but it was too late and all that was left were my tears and the wonderful feeling that had produced them.
Saturday night, I had viewed the short clip Channel 4 News had produced recognizing the kindness of her friends and neighbors and I imagine that it had had something to do with my emotional state, although I was only guessing.  None the less, I found myself wide awake and alone in the dark, reflecting on pleasant memories of Jo from recent days.
I relived my time with her early in the week, and subsequent visits in the days that followed, recalling how refreshing it had been to see her feeling a little better.  Her big smile entered immediately into my mind and once there, I found it difficult to push aside, not that I really wanted it gone, ...it's just that trying to fit anything else in my mental picture became nearly impossible.  After some trying, however, I began to recall the faces of people, some familiar, but most strangers to me, that over the past weeks have poured into her living room, bringing flowers, food, treats, music and gifts of all kinds, all given with sincere feelings of Charity.  Not the Charity that most often comes to mind at the mention of the word, but something much, much more, ...the attitude of pure, Christ like love.

Rising, I went to the living room and turned to a familiar passage of scripture. 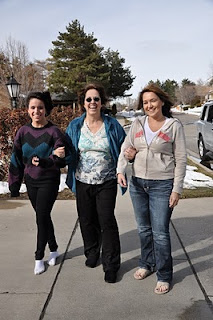 "And charity suffereth long, and is kind, and envieth not, and is not puffed up, seeketh not her own, is not easily provoked, thinketh no evil, and rejoiceth not in iniquity, but rejoiceth in the truth, beareth all things, believeth all things, hopeth all things, endureth all things.  Wherefore, ...if ye have not charity, ye are nothing, for charity never faileth.  Wherefore, cleave unto charity, which is the greatest of all, for all things must fail.
But charity is the pure love of Christ, and it endureth forever..."

Faith, Hope, and Charity.  JoLyn embodies all three, and after what we her family have witnessed in the people who love her, I think it's pretty safe to say that she's not alone.

To you beautiful people who are so right, and good, ...to all of you who have served, visited, written, sent letters, donations, and gifts I say, that someday, when all that is left of my mortal experience are memories of those who knew me, I pray I will have done something to merit being mentioned in the reverence with which I think of you.  Thanks, from the most tender reaches of my heart.