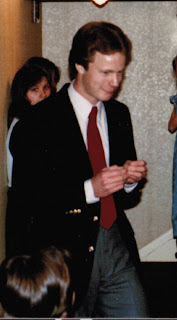 The first time I saw John was when we played on    opposing seventh grade basketball   teams in 1975, but a year later, at regional band competition we became friends.  Content to stand in the shadow of his more flamboyant friend, he listened more than he spoke, laughed easily but not loudly, and seemed never to be without a smile.  He had an air of congeniality that made me think from our first hand shake that he was one of the truly good guys.

That summer my parents informed us that we would be moving east to the town of Richfield where Dad had accepted a teaching position in the LDS Seminary and Institute programs there.  The thought of leaving my friends was an unpleasant one by itself, but to be moving to a rival school? ...now that was just plain unacceptable!  The faces of the Richfield boys I had played against flashed like fearsome monsters in my imagination, causing me to question if I would survive such a change.


Richfield was home to the only bunch of guys to have beaten my long time friends and I.  On our floor or field, we always won, but on theirs, they were unbeatable.  I obsessed over wondering if the guys I'd beaten on the wrestling mat would somehow organize and pummel me to death in the name of revenge, and visions of being shunned by others because of our bitter sports rivalry had me convinced I wouldn't survive to see high school.
Then came the unforgettable image of John Olsen's inviting smile from that day at Snow College, and I suddenly felt things would somehow work out, and they did.  John wasn't the first friend I made in my new town, but it wasn't long before he affected my life.  Always the boy scout in terms of character, and nearly always on perfect behavior, John befriended everyone, crossing boundaries most kids his age wouldn't, to lift the struggling loner, the culturally segregated, and physically challenged, all without thought of social repercussions.  I guess that's why I love and revere him like I do, because thinking back, I realize that by many respects, I lived somewhere in those hapless categories.
John loved my sense of adventure, because he found it difficult himself to take risks that could be dangerous.  He supported my religious and moral standards unabashedly, and found ways to get me involved in the school and community artistically, even defending my right to be considered against strong traditional bias.  I'll never forget the way he looked at me after watching me kiss a girl goodnight at the end of a double date, when he asked, "How in the heck do you get up the guts to do that?"  Reviewing old pictures of me at that age, I have to wonder myself, ...perhaps ignorance enabled my bliss. 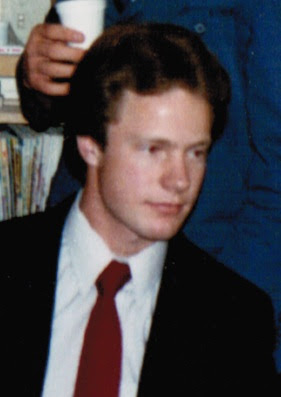 John had strong opinions about right and wrong, but a gentle tolerance which allowed him to live comfortably among people on either side of his well defined moral lines.  He kept secrets that could hurt to himself, giving advice and warning with neither alarm or judgment when it was appropriate, and I never once remember feeling hesitant to take it from him.  I still feel the sting of his strong rebuke, when I was unkind to a girl, forcing her already unfortunate social status to new lows.  I also remember his kind words about my father one day, praising his teaching skills, and the way he profoundly affected him and others in class.  I remember the unique way he shot a basketball, fierce collisions on the football field, the way he accepted his role even when it wasn't what he'd hoped for, and how he never withdrew his support for those playing ahead of him.
John was a gentleman, well mannered, and always with a chivalrous hart and hand.  He would have made a terrific husband and father had he been allowed to remain with us.  The image of he and his father walking together along the shore trail of Fish Lake right after his return from serving an LDS mission, sticks in my head with the easily recalled memory of his vibrant smiling eyes.
I miss you John, ...you were always a friend
Posted by Quinn O Heder at 12:20 PM