"What I need you to understand," he said softly, large tears welling in his soft eyes, "...is that cost is no object here.  The illness my Sweetheart has is terminal, and if I have to spend every last dime to make her remaining days pleasant, ...I will." 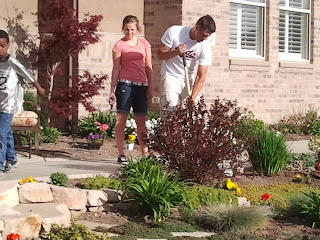 I had only just met this soft spoken gentleman, but in less time than it took him to speak those words, I grew to love and admire him.  His wife had momentarily excused herself from our landscaping consult to entertain a phone call in another room, giving him the needed opportunity to speak candidly, and after setting my well meaning concern for his unnecessary cost straight, my new friend begged me not to allow her any knowledge of our conversation.  "She mustn't know, nor anyone else, that I've spoken of her situation to you, ...will you promise me you won't say anything?"  I nodded, unable to contain my own tears and went quickly back to work on his design with a new attitude.  "I'd like it to be lush, with lots of color all season long.  England! ...just think of England.  That's what I want for her, ...can you do it?"
Immediately, the stark difference in climate between Utah and England had me on my heals, but regardless, I promised,  "We'll have our obvious obstacles, ...but God being willing, I'll do it."
We shook hands to end our meeting, and opened the door to what is now going on three years of association where in my appreciation for he and his sweet companion has grown with each successive encounter.  He later explained, as I carefully placed the numerous plantings in and around stacked stone walls, that their move, beautiful new home with all of its lavish furnishing and decor, was all part of an attempt to make her few remaining days as comfortable and enjoyable as humanly possible under her circumstance.  "Well," I sighed, fully appreciating the beauty and sweet smell of  what we were creating, "...with all the love I've sensed in your desire, put together with this?  No woman could want for more." 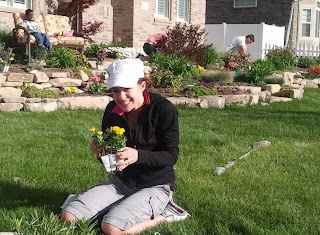 The yard turned out wonderfully, and for the past two years, we've been contracted to add Spring luster to the planter beds in the form of pink, lavender and yellow Annuals on the Saturday before Mother's Day.   A couple of months ago, I paid them a visit knowing she was declining and hoping a copy of my book would be a fun diversion from the norm, but in talking to him I learned she had already entered her last days.  I gave him the book anyway, and told him how I felt about them both, fully aware I would likely not see her again, at least not in this life.  Then, two weeks later when news of  Valene passing reached me, my heart sank, thinking of how devastated Bud must be, I made a special trip over hoping to find him home.  As fate would have it, he drove up just as I was getting out of my truck, and quickly came out of the garage to greet me.  All at once, a flood of emotion swept over me, as I looked at the emerging greenery around the home and realized he wouldn't be calling me to decorate for the upcoming holiday.  I was surprised how much my heart hurt thinking about it, and true to form, it took Bud about a half a second to put his arms around me and begin to console me.  I had intended to offer my condolences, and hopefully lend some portion of comfort, but instead was blessed by his charity. 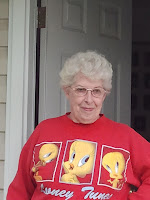 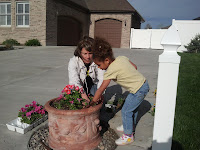 Today, I'm thinking of my own beautiful bride, a wonderful mother and friend.  I'm also thankful for a mom who continues to be the constant light toward which I walk in life.
To Valene, where ever you are, and in reverence to the man who loves you, ...I hope you like the flowers.
Posted by Quinn O Heder at 11:16 AM