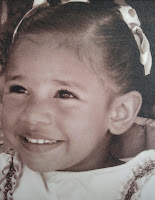 "Hey Daddy," our four year old Danielle just called from the top of the stairs, "...I think I look hungry!"
"Hungry?" I asked, as she peered down at me from between the spindles on the banister.
"Yes, I look very hungry for sugar toast, ...Yup, sugar toast is what I look hungry for, ...I Love Sugar!"
Giving sugar to Danny is exactly the wrong thing for me as her father to do, but I did it anyway, full blown sugar and cinnamon toast with white sugar glaze to boot!  Nobody else is up to catch me in the act, so if she doesn't tell, they'll all just think she's just having a bad day when the havoc begins.
This morning I'm up early, I visited my email account, and then, as is my morning custom these days, clicked on jolynsjourney.blogspot.com to see if there was any new word on my sister's condition.  I think of her nearly constantly these days, but with work having piled up on me so much because of my frequent absences over the past couple of months I am forced to work longer hours than I seem to have strength.  Last Sunday was my most recent visit to JoLyn, ...not nearly recent enough for my liking, so thinking of, and praying for her is what I do.  (Sorry for the delayed post, a lot happened between Sunday Morning draft time and the Evening when I normally clean things up and publish. It's almost 7pm on Tuesday and I just though I'd better get this post up.  JoLyn has taken a bad turn, and all the big cancer guns have been turned in for strong meds. It looks like...  Marianne just handed me the phone, it was my brother Lane informing me that only minutes ago she passed away.  Funny how spiritual things work in us, respecting Chad's request for peace and quiet in their home until the moment arrived, I've reluctantly refrained from visiting, and as I sat down  to do this, I had strong feelings about her and felt the need to amend this post.  I hesitate to continue writing for fear of seeming sensationalistic, however, I think I will finish my thoughts, and perhaps add a few more.  I was about to say that it looked like seeing her a week ago might have to be enough, and I guess I just got my answer.  My heart is full, yet conflicted, so sad, yet thrilled for her as she is about to be reunited with God.  What could be better? ...even if we that are left behind struggle to find the joy in it.  JoLyn's fought like crazy the last few weeks, surviving three weeks longer than the three days the cancer doctors said she could hope for.  I didn't realize how tough she was, never really gave her credit for that, but I do now. 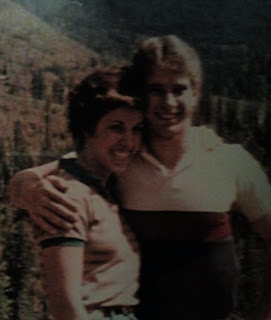 After watching my brother Van suffer horribly with his own battle a year ago, I've been observing with worry as JoLyn chose to continue her fight beyond traditional medical thinking, knowing that it would mean similar suffering to his.  She did though, sensative to the fact that some of her children needed  a little more time to come to grips, ...find personal closure if you will, even though the cost for her would be torturous at best.  Knowing her like I do, I get it.  She's always been selfless.  I'm blessed just being her brother, ...have been all my life.  Our relationship was always solid, so there are no regrets, ...sadness, heavy heart pain and lots of tears, but deffinitely not regret.  I love you my sweet sister, with all the tenderness in my heart I wish you the very best Heaven has to offer.  Say hello to Van for me )


(Pardon the interruption, here is the rest of Sunday's Post. It seems even less trivial than when I wrote it, but there doesn't seem to be any reason to send it back where it came from, so enjoy, and have a terrific week, Quinn)

A reader contacted me this past week, he manages properties for The Boyer Co. and one in particular that my company maintains, and before getting to his business concern, he blurted out, "I read your book! Man! ...you made me cry, ...twice!"  I had to chuckle to myself, enjoying thoroughly his every word as he continued on for another five minutes about his reading experience.  I love that my readers are getting me, and that Search For Yesterday is more than just a "fun" read for most.  When I first realized that I really could write a whole book, I placed my aim to a point higher than the majority of books I've read through the years, hoping more than anything else to find a way to transfer real feelings in attempting to tell a story.  I knew immediately just the places that had touched him, but was encouraged as he recounted other parts where his emotions were touched in other ways prompting him to want to tell me about it.  I know the places of which he spoke, because while writing them, I found myself choking back tears, I felt the stinging ache in my throat and chest as my heart broke reliving with my characters the hurt of a sometimes insensitive world.
A couple of weeks ago, a close friend called me to tell me of the passing of his friend and room mate.  Having lost his wife and child because of personal mistakes, he finally arrived at a point where despair became his motivate and once alone in the house, took his own life.  I've thought a lot on the whys, and conditions that might together add up to something so seemingly hopeless as to make one feel life wasn't worth living anymore.  Several of my close friends have found themselves in a similar spot and lost their battle with reason, and all I can think is how I wish I'd have done more, been more, tried harder to lighten their burden.  In each instance, however, as I've wallowed in my own sense of guilt for not being enough of a friend to recognize and help, I've always come to the eventual realization that God is over all and his love is sufficient to heal even the most broken heart.
I'm not sure why I'm writing about this, I guess it's just one of the random things on my mind this morning, but I do think that people need constant avenues of escape from harsh reality, which often becomes unbearable.  Perhaps through my, and other's writings, such despairing people may find relief from their sufferings long enough to gain enough perspective to fight another day.
I read an article yesterday written about making a living writing fictional novels.  I wish I hadn't read it, because it as all about methodology of writing in such a way to take advantage of a particular audience's emotional need in order to become a best seller.  I feel almost dirty after learning how reading for many is addictive and indulgent, and that like a drug, if crafted and contrived correctly, my books could become their fix.  I'd be lying by saying I don't want to sell millions of books, but the grayed moral area of which I am referring isn't a place I ever want to be.  God help me if my motives change with success or because of my seeking it.
In saying that, I in no way mean to condemn other writers who might follow this or another formula for success,  I'm just saying that my personal objective in writing is to provide a reading experience that compels by virtue of pure motive rather than stratagem alone.
Wow! Now I'm having a personal dilemma as to whether or not I should hit the backspace button and take that back so as not to unintentionally offend, but I think I won't. To say that all writing must come to be without thought, form, methodology, strategy, or enticing, flattering and captivating words and structure, would be ridiculous.  I along with countless others toil over not just pages and paragraphs, but sentences and words, to find just the right touch, to create just enough magic to awaken the senses of our readers, enticing them to leave their own world and join ours.  I have read authors though, who seem after realizing their success, to get tired and begin losing interest in their craft in order to pump out their next money maker, and I personally hope to never be thought guilty of that. 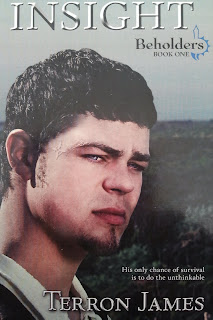 I met a nice guy this week, a fellow author Terron James, who traded me his book "Insight" for one of mine.  I don't usually read fantasy, but my curiosity drove me to sit down for a while and give it a try.  So far, I'm intrigued by Terron's story, and find his writing style easy to follow and fun to read.  Terron, in his own words, told me he wrote this book purely as an attempt to provide readers with an entertaining experience, and so far at least, he's done that for me.  I love creative people, who aren't just expressive for the sake of being heard, but who artistically express themselves with the intent of producing something beneficial, either for themselves, or the mutual appreciation of others.It's a beautiful Sunday morning, and I know this post may seem somewhat random, but I didn't have just one thing on my mind and thought an "as I go" view into what's going on in my head today might be fun, ...or not.  Have a nice week any way.  ... Oh crap, I'm busted, ...Marianne just asked Danny what she could fix her for breakfast...
Posted by Quinn O Heder at 7:54 PM