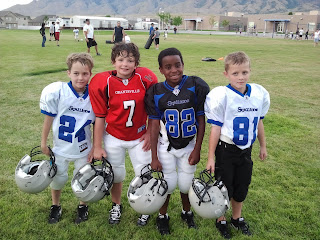 As I  left the Granger City Park parking lot after my 8 year old Andrew's football game yesterday, traffic quickly grew congested and it became clear we would  be a while getting through it.  On our right, walking as slow and feebly as traffic seemed to be moving, an elderly man caught our attention.  Dressed in a worn, long sleeved over shirt, gloved hands, and carrying a tattered plastic garbage bag barely able to hold the blanket and sundry personal belongings visible through its transparent sides, he walked with a tired hitch, but seemed intent on getting somewhere no matter how long his crawling pace would take.
"Does that man need help Dad?" Andrew asked over his shoulder from the passenger window out of which head, both elbows, and chest were hanging as he occupied his boredom with distractions of the busy street.
"I don't know, ...he's old, but he looks like he's getting along ok," I replied.
"His stuff's gonna fall out of that bag I think," Andrew returned, "...we should see if we can help him."  Having already lost my morning to the "all time consuming" involvement in Andrew's football team, I grumbled silently, not sure what more I was willing to give at the moment, but my little boy's eyes held steady, piercing mine and reaching all the way into my reluctant heart.  Before I realized what I was doing, I was turning the car from traffic and into an abandoned convenience store parking lot.
"What are we gonna do Dad?" Andrew's eyes beamed, "...are we gonna help him?"
"Call to him and ask if he needs some help." 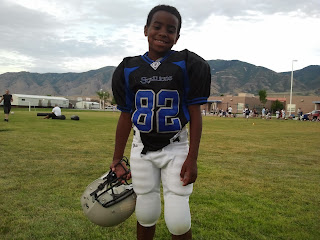 "Hey Man!" he called from where he hung out the window, "...can we help you?"  I was surprised by Andrew's uncharacteristic candor, he's normally overly reserved when it comes to strangers, but he seemed free of reservation as he addressed the old man and waited his response. Finding a bill in my wallet, I tapped Andrew's hip, which apart from his legs and feet was the only part of him still inside the car.  Glancing back he took the money and immediately held it out toward the approaching man.
"You're very kind young man," the stranger said, taking his offering and leaning  to peer into the window at me.  "Thank you sir," his eyes glistened complimenting a pleasant smile, "...you have a fine boy."  He patted Andrew's head and turned away.  For a long moment, I stayed, watching him go and contemplating what had just happened.  The sound of Andrew's questioning voice brought me back to reality, as while tapping me on the shoulder he asked anxiously...,
"Is that doing our duty Dad?"  That's when it all made sense to me.  You see, recently I was asked to lead a den of beginning Cub Scouts, and in our first meeting during the week, Andrew had learned the Cub Scout Promise.  "I promise to do my best, to do my duty, to God and my country.  To help other people and to obey the law of the pack."
Less than an hour earlier, when responding to an irritated coach in defense of his not making a false start call when several players on the line shifted prematurely, a game official yelled back...,
"Come on coach?  They're only eight years old, ...what do you expect?" 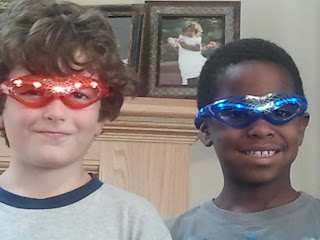 To that, I now must say enphatically, I expect more!  When we as adults fail to recognize a child's ability to learn and implement values such as duty and accountability, whether it be in home, at school, or on a sports team, we also fail them in life.  In the past six weeks, our little players, as young as they are, have learned the rules of football, and understand the consequences for breaking them.  After less than an hour, learning and discussing the parts and meaning of  "The Promise" each boy makes when he joins the Cub Scouts, my little boy has become the helper of the needy, the protector of the week, and for at least one old homeless man and myself, ...an example of proper humanity.
Maybe this week, the rest of us can be more on the lookout, quicker to act, and someone because of us will find their going a little bit better.
Posted by Quinn O Heder at 3:10 PM